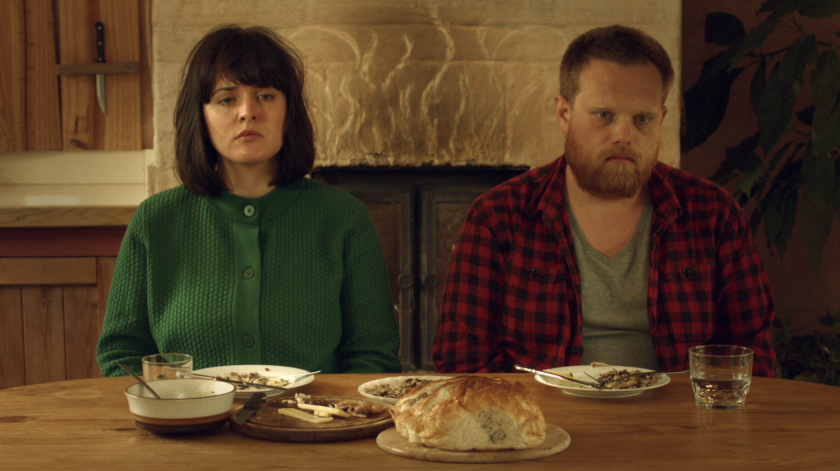 Vicky Langan is a Cork-based artist whose practice operates across several often overlapping fields, chiefly performance, sound, and film. Langan both embraces and projects vulnerability, offering an intimate territory loaded with personal symbolism and unguarded emotion. With a focus on the sounds of the body and its functions, involving contact-­miked skin, amplified breath and live electronic manipulation, Langan’s work sits between sound and performance art. Using simple raw materials, she layers physical gestures and scraps of sound to create intensely personal imaginary landscapes. Mundane domesticity is explored as a temporal space where the material body and sensual inner worlds mesh. In opening herself emotionally, she creates warm yet discomforting rituals that at once embrace the viewer and remain resolutely private, exploring the limits of what can be shared between people and what must remain mysterious. As a curator, Langan is known for Black Sun Cork, a platform for world-class underground music and experimental cinema in Ireland that she founded in 2009.

Maximilian Le Cain makes experimental works that explore a personal relationship with cinema as a site of haunting. Accepted visual and storytelling codes are encouraged to collapse into a more personalized system that approaches moving imagery as an experiential construct open to possession by multiple claims of memory and interpretation. His extensive body of films and videos has been screened in cinemas and art venues worldwide. He collaborates with Esperanza Collado on the multidisciplinary art project Operation Rewrite. He received a 2012 Arts Council Project Award to create the expanded cinema event Gorging Limpet with composer Karen Power which developed into an ongoing project. He is also a film programmer and critic. He curated films for Black Sun (2009-2013), Cork’s regular experimental music/film event, and edited Cork Film Centre’s online experimental film journal Experimental Conversations (2008-2014).

Declan Synnott works with a variety of methods based around tape and analogue synthesiser. Rooted in noise and experimental sound, his work is focused on dense, immersive sound, intentionally loose from any strict structural boundary. Declan also plays with the groups Siorai Geimhreadh, mvestle and Horse, and is a member of the label Box Emissions, releasing small editions of a variety of left of field music.

Dean Kavanagh is an independent filmmaker and producer from Wicklow, Ireland where he has been active in the film industry for over a decade. Kavanagh shot his first feature at the age of 22 and has since completed over 5 feature-length films and over 60 shorts to date. By way of cinematography and dense sonic structure he forms sensory atmospheres that attempt to fold narrative and form back on themselves. Explorations of time, biology and landscape are key concerns of his filmography which seeks to probe the void between frames, articulating an ongoing exploration of the zone between audience and screen. His films have been showcased internationally.

He has worked as a freelance cinematographer and editor on commercial and underground projects, winning awards for his craft. He was a member of Experimental Film Society. In 2013 Kavanagh founded Easter Film Group as a creative platform for his films. He released 7 albums of ambient, noise, electronica and drone as part of the group Cinema Cyanide. Kavanagh is a recipient of The Irish Arts Council’s Film Bursary Award and Film Project Award. He is currently employed by the Irish Film Programming department of the Irish Film Institute (IFI). He also holds a BA Hons. degree in Media Arts.

Michael Higgins is a photographer, filmmaker and installation artist best known for his analogue film work. Having grown up in Ireland, he studied at Dublin City University and Ireland’s National College of Art and Design. Higgins is interested in using the filmmaking process to rupture the reality of the everyday, skewing documentary and fiction in order to highlight alternative ways of seeing and experiencing. Over the years, his film and video works have been screened around the world in cities such as New York, Tehran, Berlin, Paris and London. In 2015 Higgins co-founded Open Night Cinema, a film studio and venue that is home to a series of expanded cinema events that incorporate sound art, film installations and improvised performance in response to place. He currently lives and works in Dublin, Ireland and has been a recipient of the Irish Arts Council’s Film Project Award and Film Bursary Award. He also works as a freelance colourist and editor.